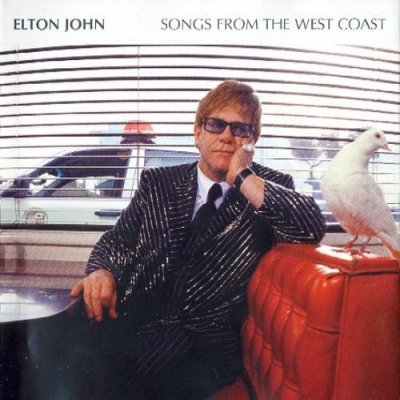 Songs from the West Coast is the twenty-sixth studio album by British singer-songwriter Elton John, released worldwide on 1 October 2001. Many critics have said that this album brought John back to his piano-based musical roots.

For this album, John once again collaborated with long-time lyricist Bernie Taupin, marking the first time the pair had written together in person. Patrick Leonard produced the album and played keyboards on several songs, as was the case for The Road to El Dorado soundtrack, released the year before. Drummer Nigel Olsson returned to the Elton John Band full-time and Tata Vega makes an early appearance as a backup vocalist, joining the band later. Stevie Wonder, who previously worked with John for the songs "I Guess That’s Why They Call It the Blues" and "That’s What Friends Are For", played harmonica and clavinet on "Dark Diamond". Guy Babylon, Bob Birch and John Mahon, three of John’s band members at the time, do not appear on this album.

It was the first non-soundtrack studio album from John to be released after PolyGram and Universal Music Group merged, consolidating distribution rights to his entire catalogue.

Rufus Wainwright sings backing vocals on the track "American Triangle", which is about Matthew Shepard, a gay college student who was brutally murdered in 1998. The album was dedicated to Shepard and Oliver Johnstone, band member Davey Johnstone’s late son.

John has said that the inspiration for many of the songs on this album came from when he listened to Heartbreaker by Ryan Adams.

In an interview with Jon Wiederhorn in 2001, John revealed that the album was recorded using analogue tape, as he believes "the voice and instruments sound warmer".

In 2002, the album was repackaged as a special edition containing a bonus disc with remixes, B-sides and non-album singles from the time of its release.

"I Want Love" was the first single to be released from the album, later going on to be nominated for a Grammy Award. It reached No. 7 in the UK Singles Chart, No. 110 on the US Billboard Bubbling Under chart and No. 6 on the Adult Contemporary chart. It reached No. 9 in Canada. "This Train Don’t Stop There Anymore" and "Original Sin" also became hit singles. None of the songs from this album hit the Billboard Hot 100 in the United States, which froze John’s record of 31 years with at least one song in the Billboard Hot 100 (30 with at least one in the top 40). George Strait tied that record on the Country charts in 2011.

The restaurant shown on the album’s cover is Rae’s Restaurant, which is frequently used as a location for many Los Angeles-based film shoots, including 1993’s True Romance and 2005’s Lords of Dogtown. John’s partner David Furnish and his Director of Operations Bob Halley appear on the album cover: Furnish as a cowboy at the bar and Halley as the man getting handcuffed.

For the most part, Songs from the West Coast was warmly received by music critics. AllMusic’s Stephen Thomas Erlewine was glad that John made a record that sounds like his >[1] Ken Tucker of Entertainment Weekly stated that the album effectively sounds like John’s early recordings. He felt that Taupin’s lyrics, such as "American Triangle", devalue the song, but at other times make John "liberated". [2] Jane Stevenson, writing for Jam! CANOE, felt glad that John returned to his roots, even if he doesn’t quite make it there. [3] Barry Walters of Rolling Stone wrote that back-to-the-roots albums by artist rarely work, but John was able to make it work on Songs from the West Coast even if some songs, such as "American Triangle" and "The Emperor’s New Clothes", miss the mark. Others, like "I Want Love", effectively manage to sound like his earlier work. [5]

All songs written by Elton John and Bernie Taupin.

The music v >[6] He is the only person to appear in the video. The entire video is one long shot where the camera follows Downey from room to room of a large empty house (Greystone Mansion).

The music video for the song "This Train Don’t Stop There Anymore" features Justin Timberlake portraying a young John.

The music video for the song "Original Sin" features Elizabeth Taylor and Mandy Moore. It also features John playing the father of Moore’s character and the husband of Taylor’s character. Moore was the centre of the video, who plays a huge Elton John fan from the 1970s who is transported by a dream (à la The Wizard of Oz) to one of his concerts, where she socialises with various celebrities of the period (Bette Midler, Sonny & Cher, Barbra Streisand, etc.) played by look-alikes. Then at the end she wakes up and John’s character asks, "Who is this Elton John, anyway?" It also has more of an upbeat dance mix to the music.

^ shipments figures based on certification alone